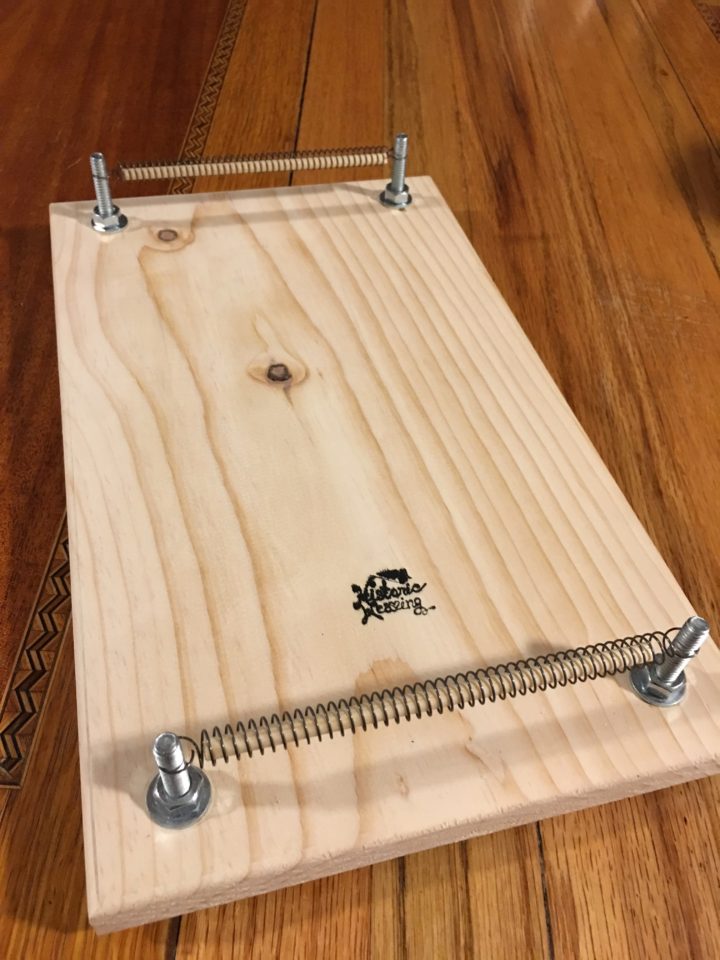 Have you wondered how you could construct enough DIY looms that were affordable for a group students to use?

I have the answer for you, try my six dollar loom. It can be constructed out of parts found at a local hardware store and does not require fancy tools to assemble. It is adjustable, transportable and able to be disassembled flat for storage.

I designed this loom this year for a weaving class at the local library, I was able to produce 20 units for $120 in parts. The hardware parts are also available in bulk from McMaster-Carr allowing you to save even more money if you happen to need even more.

It is as sturdy as a Hockett loom, it is also flexible in that you can easily modify the sett for weaving. My instructions include suggestions for the threads to be used for your very first project.

I will be using this loom design to develop more weaving lessons to be used in the classroom.

The first project is a bookmark, that is expected to take 30-60 minutes to weave in a classroom of new weavers.

Your purchase helps to fund the cost of hosting these plans and helps to keep weaving accessible to the next generation of weavers. 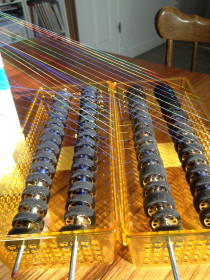 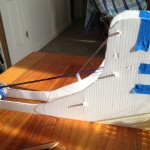 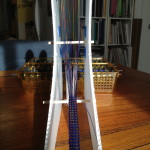 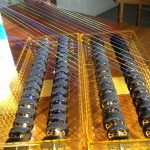 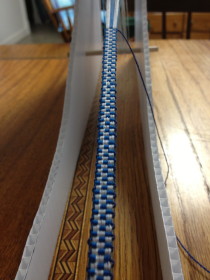 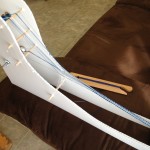 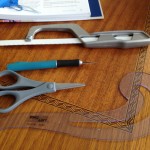 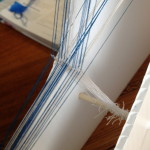 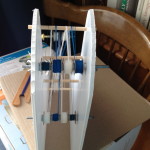 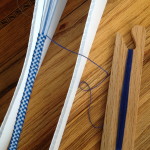 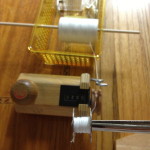 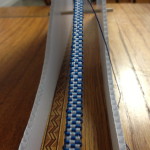 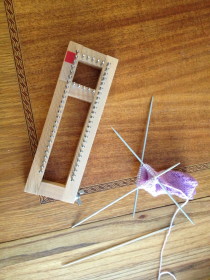 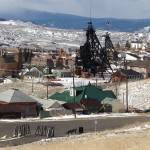 I had the opportunity to purchase a pin loom this weekend as a result of a trip to lovely Butte Montana. The day was quite enjoyable, if a bit chilly from the snow flurries. I really did not have the expectation of picking up a pin loom that day, but when I discovered it in the clearance area of a Jo-Ann’s store for 25% of its retail price, the bargain hunter in me was hooked.

I brought it home and waited until dinner was complete, and cleared away. I brought it out and looked at the instructions. All I wanted to make was a simple pair of baby socks for a grandbaby that is due in the next couple of months. I figure just a couple of hours of work. 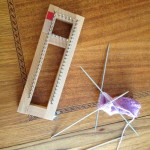 I began my project by watching the video and casting on and learning how to do the knit and the purl stitches on the loom. I noticed a couple of issues for me right away. It is difficult to reach the middle area of the sock when it is set to a small size. Two start over’s and more than 8 hours later, I looked at the project and it was not all that I hoped for. 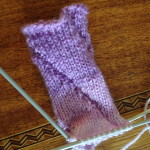 I am not a great knitter (I am a weaver). I can read and follow patterns, but often it is the counting that gets the better of me. But give me credit, I pulled out my trusty (rusty) double point needles, cast on and got started. Finding the locations of the purl stitches on the needles was easier to remember — I divided the stitches evenly so that I knew the two purl stitches were on the outside ends of the needles and never in the middle. On the pin loom I needed to use some sort of marker – the red post it tab.  In less than three hours I had this sock halfway knit. Note that you are seeing the right side of the sock in this picture, but when I am knitting the right side is on the interior of the needles. (Experienced knitters don’t snicker too hard, I am handicapped – I am left handed.)  I always have to peek inside to see what is going on. I completed the sock tonight with only minor trauma, when I picked up the knitting after taking this picture I forgot to turn it inside out before starting to knit… I had a four rows of purl stitches before I realized it. Off come the needles, and out come the stitches —(I was almost in despair except for a friendly crochet hook to save the day).  Weaving is easier than this. Here is my final sock, a spiral tube.  Has anyone woven a baby sock, and how did you accomplish your magic feat? 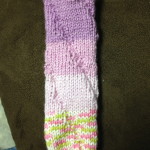 My assessment: the sock loom is nice and sturdy,  and it works according to the instructions that come with it.  It is probably designed for someone who is a bit skinnier than I (children’s – teen’s socks).  According to the directions I need to cast on 88 stitches to make a sock for myself and my loom is not that big (you can only cast on 60 stitches) The loom gauge is 7 stitches per inch. The actual knitting is not difficult – the rhythm  is addicting once you get going. But it is more time consuming that I thought. I think I’ll stick to the knitting needles for this particular task this time.

I have one more experiment to do with this loom, see if I can weave a bookmark on it.